With Microsoft in a Dive, Ballmer Pushes the Throttles Forward

Please discuss this on the
Linuxslate.com Forums

Several news sites and blogs are commenting on a leaked internal Microsoft memo in which CEO Steve Ballmer outlines some strategies for Microsoft's 2009 Fiscal Year. While I may not get the page hits that the big news sites get, I could not help joining in with a few comments of my own. Specifically, I want to comment on 2 points that Mr. Ballmer mentions.

First, in the section on Apple, Ballmer says “...they [Apple] 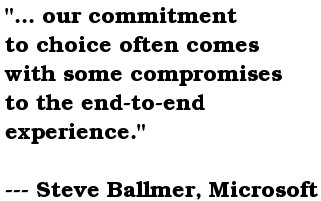 are good at providing an experience that is narrow but complete, while our commitment to choice often comes with some compromises to the end-to-end experience...” He is basically admitting what us Microsoft bashers always say... Windows stinks. Interestingly, this does not seem to refer specifically to Vista - “often” seems to be a reference to different versions of Windows over time. Admissions like this cannot possibly help Vista's perception. Linux bashers will not hesitate to point out that “compromised end-to-end experience” can also describe the lost sleep from trying to get your Laptop's WiFi working under [insert Linux distribution name here] - At least with Linux, I can get my “compromised end-to-end experience” without paying hundreds of dollars for it.

While every Microsoft basher enjoys it when Microsoft bashes Microsoft, the second point highlights Ballmer's lack of perception and poor corporate piloting skills even more. Ballmer externalizes the problems with Windows, and blames it on the PC manufactures. Ballmer states: “Today, we’re changing the way we work with hardware vendors to ensure that we can provide complete experiences with absolutely no compromises. We’ll do the same with phones.” I read this as “We're going to start telling the hardware vendors what they can and cannot do.” Yeah - I am sure the Hardware vendors will love this idea. It's true that one of Windows problems is that it must run on a huge variety of hardware. Hardware driver issues are one of the biggest causes of complaints about Vista. Apple does not experience this problem since it is in control of most of the hardware that Mac OS must support. However, the hardware manufactures are already sick and tired being under Microsoft's thumb. Every new peripheral, and every new chipset makes the hardware vendors play “Mother may I” with Microsoft.  The drivers must be part of, or at least compatible with, the closed-source Windows OS. Even if Ballmer just means that Microsoft is going to request more information from the hardware vendors, and/or request it earlier in the product design cycle, I would think that the designers would have better things to do than provide developer support for Microsoft. Additionally, hardware vendors increasingly want to offer their customers the choice of Linux. Microsoft has always acted hostilely, perhaps even illegally, when a vendor threatens to sell PC's with a option to choose an alternative OS. Microsoft cannot foster a more amiable relationship with the hardware makers, and simultaneously continue to threaten them. Lastly, as hardware prices decrease, the vendors increasingly look to avoid giving their profits away in the form of Windows license fees. Hardware vendors want more freedom from Microsoft, not less. The fact that Mr. Ballmer includes phones makes his comment even more remarkable. Mobile phone hardware changes faster, is more varied, and requires a faster time-to-market than we see in the standard PC world. The license fee is also much more of an impact. In my opinion, Microsoft has already lost the mobile phone OS business. They ought to just give up. Blaming handset designers for a poor user experience, and then handcuffing them is certainly not going to help stem thier abandonemt of Windows Mobile.

Ballmer also mentions that an ad campaign is going to start shortly to “...address any lingering doubts” about Vista. It will be interesting to see how they do this without re-enforcing the fact that it had a problem in the first place. What are they going to say? “Vista – now less lousy.” “Vista – I'd be a great OS if all the PC's weren't  so lousy”.

--- The author had a un-compromised end-to-end experience while creating this document on Ubuntu Linux.

Links:
Article at All Things Digital - Contains the full text of the memo.
Coverage at The Register