NEW: You can discuss this on the
Linuxslate.com Forums
20 November 2005
Updated: 13 July 2006 (See bottom of page)
Updated: 19 Dec 2006 - Apparently Tiger has re-named the VuGo as the TV Now (TVNow).  It is selling for as little as $25.00.  They seem to have dropped the whole thing about copying video from your PC, and are marketing it as only being able to record video from TV (which is all that worked for me anyway).  I may be naive, but I think the change in strategy may have been partially a result of this review.
Final Update Apr 2012:  This page still gets some hits, but the VuGo, the TVNow, and the alternative video players I mentioned have all faded into the history of technology.  Today, All Android Tablets are Linux Slates. Many different Android devices are intended as media players, and even if they are primarily internet tablets, most can function well as media players.
I have reason to believe that only the marketing has changed and that the firmware has not even been touched, let alone fixed.  Another review indicates that the issue of very loud, and unadjustable sound during record is still present.  If they had a firmware update, I think they would have fixed this.  There is nothing in the VuGo menus that would betray it's previous marketing.  I am quite sure that "TV Now" (or "TVNow") and "VuGo" are the same device and same firmware.  There is still no mention of screen resolution, and a large yellow sticker on the packaging that covers the screen.  Covering the screen may keep the experienced eye from determining the display technology.  I strongly recommend avoiding any such product that seems to hide the display technology or specifications.

I just saw these in WalMart for the first time today.  Being a member of a family that travels allot with young children, my eye is always out for ways to entertain them.  Given that I am also very gadget happy, and sort of cheap, the thought of a small, inexpensive, flash-based media player got several of my neurons firing at the same time.  That rarely happens.  Have no fear though, it didn't last long. 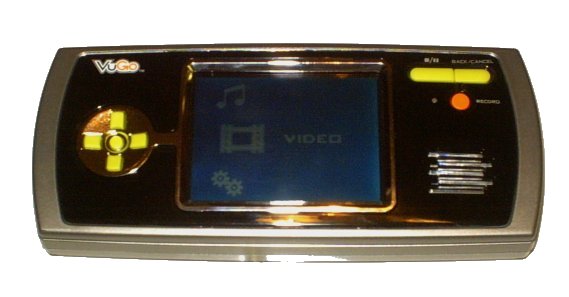 
I did a few quick Google searches on the device, and found -- Very little.  I found several product announcements, all of which were very similar.  These included "Specifications" such as:
These are Features, not Specifications, folks !!  I never could find simple specifications such as the screen resolution.  That includes checking the box, and VuGo.com.  I also did almost an hour of Google searches.  I finally found a post stating that the VuGo was essentially the same device as the ZVUE Media Player (Link Below).  The ZVUE pages do have specs, and list the resolution as 160 x 240.

With such poor information available,  I had my last incentive to go buy one -- I could write a review !

Buying one was somewhat interesting in itself.  Here are some different prices I saw:

"Out of the Box" Experience

Physical:  OK, for $99 I don't expect a whole lot.  The case is just plastic, but  the feel is kinda nice, all things considered.  I really like the form factor, and the back of the unit is contoured to be better to hold.

Back of the VuGo is contoured for grip.


The buttons are cheap feeling, (more on that later) but well located. It's a fraction the size of any portable DVD player. I kinda like the fact that it runs on AAA batteries - no worrying about charging, or how many charge/discharge cycles you have left on a battery pack that costs half the price of the device.  If you want to watch more while traveling, AAA cells are available almost anyplace.  [Note: See Update below].  Also, the SD/MMC card slot has a cover, and does have the push-to-eject feature.  This is important to both those who bite their nails down to blood, or for those who like to keep their nails really nice --  OK, I guess the nail bitting and blood bit has no part in a review like this, but I do have a pet-peeve about gadgets that lack this simple feature.


The left side has the AV input jack, and the screen adjustment.  The right side has the mini USB port (same style as seen on many inexpensive Cameras, MP3 Players, etc.) and the DC power jack.  Someone reported that their DC power plug fit very loosely in the machine, and would fall out or loose contact - sometimes while recording.  I can say that this is NOT a problem on my unit once the plug is fully inserted.

Power Up:  The first thing you notice is the screen.  Sorry to say, but it is terrible.  Given that a PlayStation Portable (PSP) costs twice as much, and the screen is more than twice as big, it is (IMHO) fair to expect at least similar quality over the smaller area.  Forget it.  The brightness is fine, and the contrast is easily adjustable by a (analog) wheel on the left side, but I can see why they won't readily tell you the resolution.


And it has a SD card slot right?  So a good quick test would be to stick some JPEG's, MP3's, and AVI's on a SD card and pop it in the machine right?  Well -- this didn't work!  The VuGo reported that there were no Movies, Music, or Pictures on the card.  OK -- let the VuGo format the card, and then try - perhaps there is a specific directory structure or something.   Sure enough it does create 3 directories, music, movies, and photos.  So I re-copy the files to the appropriate directories.  Still the VuGo recognizes none of them !!!  What they mean is that the PC (or Mac) Software supports those file types NOT the VuGo.  IANAL (I am not a lawyer), but I think we are getting really close to false and/or misleading advertising here.  I was really hoping for a nice, small, inexpensive media player that would play standard file formats.

Recording Some Video: The VuGo can record video and music directly from any line-level source. Given the failure to play standard media types off the SD card, I thought I'd try recording some analog video.  The "Octopus" cable included with the VuGo makes connecting the VuGo for recording very straigtht forward. The VuGo has a manual record mode and a VCR-like timer. I manually recored some cartoons for the kids. This worked, but I have several complaints:
Despite the above, I will say that on several occasions the VuGo - loaded with a few episodes of "Dora The Explorer" did  keep a 3 year old quiet.

VuGo's DRM: (Disclaimer: As of this writing, I have not tried the VuGo software, so this section is more of a rant than a review.) The VuGo will not work as a standard USB storage device. A given VuGo must be "paired" to a single PC or Mac. Additionally, only a maximum of 2 VuGo's can be paired to a PC. Got 3 kids? tough. The VuGo content is managed by the VuGo PC software, and syncronization takes place when the VuGo is connected via USB. The VuGo software translates the various file formats into the respective VuGo formats. We must assume that this is done to prevent file-swapping.  It's the VuGo version of DRM (Digital Rights Management - Wikipedia link below). I am sure you can see the horrendous damage that would be done to our economy if my son should swap an episode of "SpongeBob SquarePants" with his friend down the street; Or worse than that -- think of the frightening possibilty that some kid may record an episode of the "Backyardigans" in the VuGo's couple pixel by couple pixel resolution, and it should get out on a Peer-To-Peer network. I am shaking with horror at the mere possibility. What's really amazing is that they may have found the one true way to make DRM that nobody will crack:  Make the device so lousy that nobody will bother to try.

VuGo on the Web:  Think my criticism is going to stop with just bashing the device and its software? Nope! If you surf to VuGo.com, you notice 2 things immediately: First, it is infested with Shockwave, and second, there's not much there.

UPDATE:
I will not be continuing this review as previously promised for the following reasons:

If you are looking for something that basically fits the description of the VuGo, but is much more capable, I recommend the GP2X.  (See Links Below).  The GP2X sells in the US for $189.99 (With free shipping as of this writing).  The GP2X does not record TV without separate hardware, but it did pass all my quick tests mentioned above.  It plays many standard formats without conversion, and appears as a standard USB storage device when plugged into any Windows, Mac, or Linux system.  It also currently contains no DRM limits or locks, and the company that makes it (Gamepark Holdings) has promised that DRM will only apply to commercial games that they sell specifically for the GP2X.  Your ability to play standard media file types or 3rd party games will not be disabled with a firmware update (like what Sony keeps doing to PSP customers).  The GP2X can also be connected to a TV or Monitor(s), so it can even replace a car or portable DVD player.  This requires only a cable available from the same retailer - no hacking or opening the case.
Given the ability to play standard file formats, freedom from intentional incompatibilities, Video output functionality, and ability to play thousands of games (via emulation of many game consoles) it is a better deal (IMHO) than the more popular handheld gaming units such as the PSP and Nitendo DS.

Update Apr 2012:  Sadly, Neither the GP2X, or the GP2X Wiz (which was it's successor) are sold any more.  I would reccommend an Android based media player or tablet.