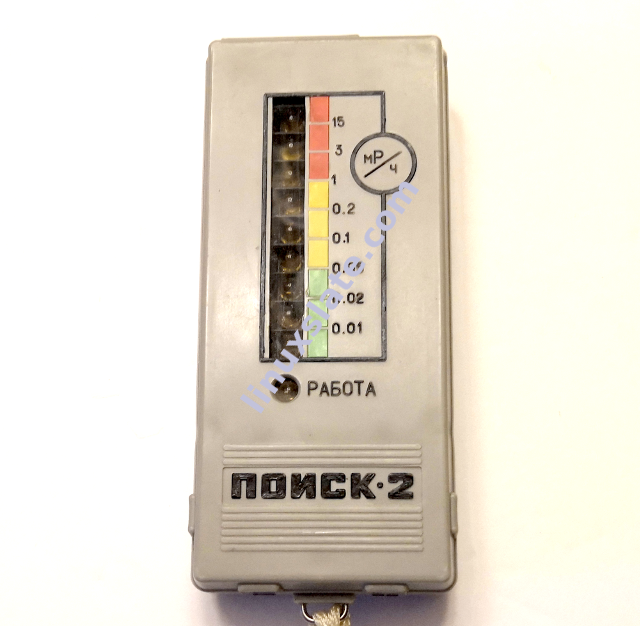 In the case of this particular unit, and similar vintage Soviet era Rad Meters, I will say up front that the primary justification is definitely the uniqueness and nostalgic aspects. Even when sticking with a device from an Eastern European country, a device such as the Ecotest MKS-05, or the new Rodnik-3 are far more practical for alerting you to radiation accidents or exposure.

Even though the instruction manual (and eBay sellers) repeatedly refer to the Search-2 as a Dosimeter (дозиметр is the same word in Russian, just spelled in Cryllic letters), the Search-2 cannot actually measure accumulated dose.  The Search-2 is, however, an actual Geiger Counter, and in fact contains 2 Geiger-Muller tubes (More on the specific GM tubes later.)

Linuxslate.com does not recommend nor review devices with semiconductor Γ (gamma) only sensors. Like all Geiger counters, the Search-2 detects ionizing radiation. It is not affected, nor should it be, by RF radiation from e.g. a mobile phone or microwave oven.

Other than the very stereotypical 1980’s Soviet writing and styling, one thing that makes the Search-2 unique is the use of 9 LED’s to indicate the level of radiation.  In addition to the “Eighties-ness” of full size red LED’s, this also has a practical advantage.  If you happen to find yourself knee deep in coolant under the partially melted core of your local nuclear power plant, the LEDs will be clearly observable with only the light from the Cherenkov glow. In less harsh conditions, I’m quite sure that the 30 years that have passed is nothing for the Search-2.  Other than the batteries, I think there is a very good chance mine will still be functional for many more Strontium-90 half-lives to come. 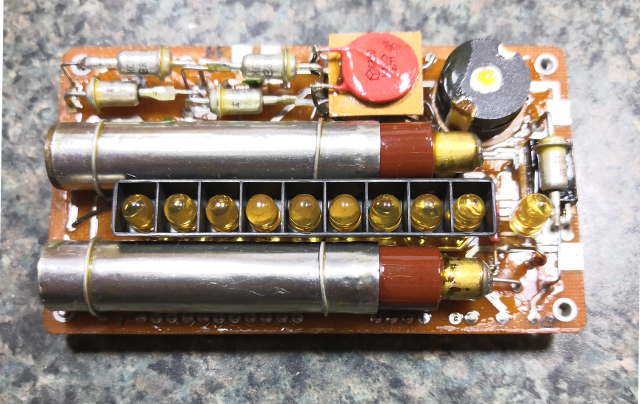 Circuit Board of the Search-2. There are actually 2 boards sandwiched together. The LEDs, along with the plastic divider can be seen between the 2 SBM-9 Geiger-Muller tubes.  In the upper left are 4 diodes that are associated with the voltage multiplier circuit. The round object to the upper right is the HV transformer, not a speaker or buzzer. The circuit boards of the Search-2 are conformal coated.

I am not reviewing this device as a recommended (or not) purchase.  That said, it is still worth pointing out some of what makes this device unique, and at least in this collector’s opinion -- collectable.

No, the Search-2 doesn’t have an LCD display, and it won’t measure accumulated does.  Other than the 9 LED display, it’s one of the most basic Rad meters even for it’s time. To use it, one simply touches the 2 small contacts conveniently located on the right side. Measuring radiation is a time-dependent function, and no Geiger Counter can give an accurate reading instantly when it is turned on.  Turning the Search-2 on begins a timed measurement of the object or surroundings.  The additional red LED marked “работа” (literally translated to “job”, but more accurately “working”) will illuminate.  The light toggles in brightness for each particle counted.  In other words, a dim → bright change, and a bright → dim change each represent the detection of a single event. There is no typical geiger counter “click”.  After a period of time, the “Working” light goes out, and a single light corresponding to the time-averaged level illuminates.  The display is not a “bar-graph”.  Radiation level is then read on the scale next to the illuminated LED.

One interesting aspect is that the detection time is a logarithmic function based on the detected level.  With low levels of radiation, the unit will always take 32 seconds to indicate a reading.  As more particles are detected, this calculation can be completed more quickly, and if your death from radiation poisoning is imminent, the Search-2 can take as little as ½ second to inform you of this unfortunate situation.  What you do with the extra 31½ seconds of your remaining life is up to you.

Unpleasant joking aside, how can one use the Search-2 in daily life?  First let me say that even with it’s two SBM-9 tubes, don’t expect the Search-2 to detect subtle, trivial changes in your radiation environment.  It’s not going to detect tiny amounts of radiation in your bathroom tile or that bundle of bananas.  While either the Ecotest MKS-05, or the Rodnik-3 can easily show these tiny amounts of radiation, The 9-LED scale of the Search-2 does not have sufficient resolution for that.  That said, it does have the advantage of forcing you to wait for a mathematically valid sampling before giving you an answer as to the amount of danger you may encounter.

Additionally, each measurement is a discrete test.  If it is exposed to a strong source of radiation, one does not have to wait for the unit to “calm down” or average out that strong event.  This is particularly useful when, for example, hunting for radioactive antiques.  First, if you do not see quick changes in the “Working” LED, and more than 16 seconds have passed, you can be pretty sure a given item is not significantly radioactive.  An item that is significantly radioactive will be detected in 1-16 seconds, and allow another item to be tested immediately after.  I’ve had to walk around antique stores with my pocket beeping for several minutes after my Rodnik-3 encountered a particularly “juicy” item.  While the Search-2 did not detect radiation in a pair of vaseline glass candle stick holders I bought, it did detect a mildly radioactive vaseline glass cat that I purchased.  In the picture below, the Search-2 clearly indicates radiation from an antique cup and saucer. 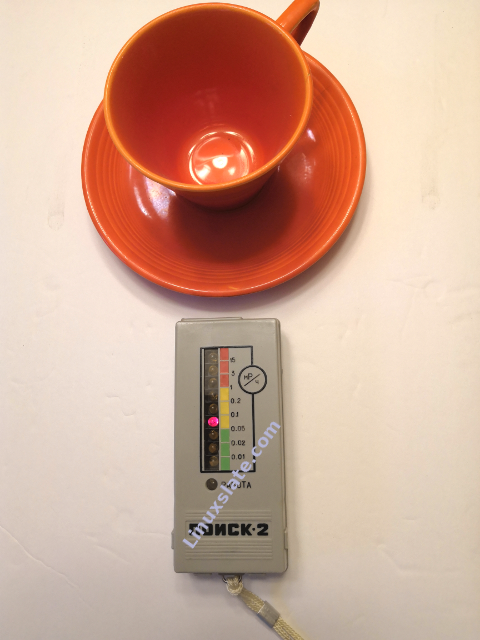 The “Search-2” reacts to an antique cup and saucer.

For the antique enthusiasts out there, this is not Fiestaware. This is Harlequin.

Look for red, orange, or yellow glazings that have retained their luster.

The Search-2 took 8 seconds to test these particular pieces.  It could detect a change in the ambient radiation level 1.5 feet (approx ½ meter) away from the items, but of course that test took the full 32 seconds.

While not specifically tested yet, the Search-2 should easily detect other radioactive items such as:

(Note that the Search-2 would have to be manually turned on for each event, as it does not have a monitor, alarm, or accumulated dose function.)

I purchased my unit from an Etsy seller based in Belaruse, and it was the last one the vendor had.  My unit was clearly advertised as used, and only included the original manual with matching serial number, and the tether cord.  The Search-2 was originally designed to run on (4) 1.2V Rechargeable D-0.26 button batteries. (320BVH equivalent).  A previous owner installed (2) 3V Lithium 2430 batteries with some wads of tinfoil to make them fit and make contact.  As mentioned in the Buyers Guide, I think having standard replaceable batteries is important for something that may need to be used in an emergency.  I considered modifying my unit to operate from (3) common “AAA” batteries, but even with significantly cutting the case, there would barely be room for 3 AAA batteries.  In the end, I stuck with the provided 2430 cells, but manufactured a plastic piece and proper contact to replace the genuine Belarusian tin foil.  The case is not cut in any way, and the unit could easily be returned to using the original D-0.26 (320BVH) batteries.

The Search-2 “Dosimeter Indicator”, with its bold Cryllic writing and Soviet apartment block styling, is definitely a cool souvenir from a bygone era.  The fact that it works as a rather basic Geiger counter is just the icing on the cake.  It's unquestionably a “Rad” meter -- a conversation piece that will continue to generate conversation, and probably still work, for generations. It’s functional enough to add a whole new dimension to a trip to the flea market or the antique mall. In an actual radiation emergency, it would be better than nothing, but for those wanting to explore the ever present, but unseen world of ionizing radiation that surrounds us all, or have a true concern about encountering hazardous items or places, a more functional Geiger counter and true dosimeter is recommended.

Linuxslate.com Review of the DRSB-88 -- An even more basic Soviet era detector.

Linuxslate.com Review of the Ecotest MKS-05

Linuxslate.com Review of the Ronik-3

There are more “Rad” reviews!  Hit the LinuxSlate.com Home Page for links.